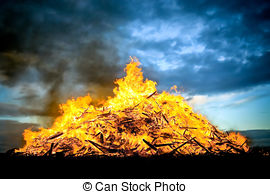 Flames of the pyre burnt their eyes. Their world was crashing down with falling woods of the pyre. A void that could never be filled, had creeped in their lives.
He rested his head on her shoulder, unable to fathom the depth of the void. How can god be so cruel? How could god take him away. He needed his companion. Yes his companion of mischief, of bedtime stories, of cricket matches and of crush stories. He was heart broken because the girl he secretly loved didn’t love him back. Whom would he open his heart to now? Who would be his companion in sorrow and happiness? Tears wouldn’t stop rolling down his eyes.

She stared at the horizon, remembering the flames of “pheras” that had brought them together. “Till death do us apart” was their promise to each other. She was an independent women, financial stability was not her concern, but how will she deal with this emotional turmoil? Ever since they had met in college, they were a team, perfect companions, and now she was left all alone with nobody to talk to, laugh or cry with. She remembered the night when she had joked about needing the entire bed for herself for a night…tears escaped at the mere thought. Now the bed is all hers for the entire life, she will not be able to hold on to anyone anymore.

All of a sudden she realized that her shoulder was wet. She hugged him tight, this was not the time to think about her loss. Her 15 year old boy needed her at this moment. She knew how strong was the father-son bond and she will have to a be a father to her son now. More than a father she would be a companion to her boy till he finds his own companion. She cried uncontrollably, tears wouldn’t stop, his words echoed in her mind and soul, “I know you are a strong woman and a perfect mom, even if something happens to me, you will take care”.  Her tears faded her vision, She wiped her tears and staring at the flames, took an oath to never let her husband down. She will take care…of their son.

Her tears were falling on his forehead. As she hugged him, he realized the depth of loss for his mother. He was mature enough to understand what it meant to lose a life partner. He had come in his parents life much later. Whenever they talked about their dates in college, he used to feel that they have spent a life time together, with so many fond memories. He felt ashamed about thinking of his secret love while his mom had lost her only love. “I will be her companion, she needs me, I can’t get weak now. Papa always said that I am a big boy, yes I can’t behave as a child anymore”, he hugged her back, promising to be for her always and till she finds another companion.